Érard’s pianos were also widely appreciated by the foremost musicians – Charles-Valentin Alkan, Beethoven, Chopin, Fauré, Haydn, Herz, Liszt, Mendelssohn, Moscheles, Wagner, Verdi and Ravel are just a few of the famous composers who owned Erard Pianos. Mid-career, Paderewski traveled on concert tours with his own Érard piano. Our friend Jorg Demus who recently passed, loved to play on his Erard piano. A newly uncovered part of history is that David Bowie as well used an Erard grand and was photographed with his piano when he had recorded “Life on Mars” 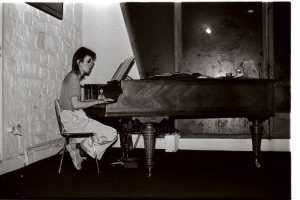 Franz Liszt is said to have played a six-octave Érard piano in Paris in 1824. Érard put him under contract from about this time until 1825, so when he toured England they sponsored him and he played their pianos.

By the year 1844, after winning various awards from previous Universal Exhibitions, Erard had made his mark known for construction and sound. His pianos were being sold and exported to every corner of the world.