Piano Interior made by Pleyel France, body designed by Emile-Jacques Ruhlmann
Furniture Designer That Introduced the World to Art Deco. Serial number 188927 year 1929. Case made of Macassar Ebony and with Gold leafing to fall board and interior. 170 cm long, 88 Ivory Keys 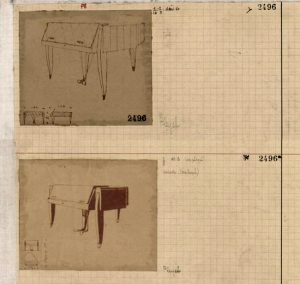 Restored by our German master team.

Emile-Jacques Ruhlmann (1879-1933) was a Parisian furniture and interior designer. Although he lacked formal training – and never personally made a piece – his ideas and designs became the cornerstone of the style commonly known today as Art Deco.

Ruhlmann’s earliest pieces of furniture date from around 1910. In 1919, he teamed up with a fellow designer, Pierre Laurent; their firm, Les Etablissements Ruhlmann et Laurent, created wallpaper, textiles, housewares, and accessories as well as furnishings. The company flourished, with its luxurious creations highly popular among the Parisian avant-garde. But it was the year 1925 that sealed Ruhlmann’s status as the master of modern when his pieces became the hit of the Paris Exposition Internationale des Arts Décoratifs et Industriels – a furniture-oriented World’s Fair he helped organize, and Art Deco was popularized around the world. (Actually coined in the 1960s, the term “art deco” derives from the title of this exhibition; at the time, the new style was known simply as “moderne”, or modern.)

Ruhlmann didn’t create new types of furniture, and many of his desks and dressing tables are modeled on 18th-century forms – even his iconic club chair has its roots in the traditional French bergère. The designer saw himself as a descendant of the great furniture-makers of the later 1700s, and his work shows the influence of their styles: in its meticulous craftsmanship, in its use of inlays, reeding, and fluting, in its floral motifs and, most of all, in its graceful proportions and balance.

The Shock of the New
Even though traditional in many attributes, Ruhlmann’s work was innovative as well. He favored a simple, streamlined silhouette – one that seems remarkably clean, even to the contemporary eye. In contrast to the sinuous, wavy lines of Art Nouveau, a style popular at the turn of the 20th century, his furniture is all sharp lines and planes, with a fondness for circular or oval shapes. Surfaces are flat, smooth and often hard – again, as opposed to the soft, highly carved fronts that predominated previously. The decorative accents that do exist are restrained and stylized.

Counterbalancing this simplicity of design were opulent materials. Ruhlmann loved using exotic woods, especially burled or birds-eye – often, the grains or texture of the wood provided the main embellishment of a piece. Though used sparingly, fittings, inlays, and other accents were made of precious materials: ivory, sharkskin, tortoiseshell. There might be a touch of gilt or silver plating in strategic places.

This contrast – severity of shape vs. sumptuousness of materials – is what made Ruhlmann’s work seem so fresh and exciting. His pieces have a subtly sensual quality, not so much from their overt design but from the ingredients that go into that design – which are allowed to shine, unimpeded by extraneous detail.

Other Characteristics of Ruhlmann’s Designs:

Strong, unbroken lines
Contrasting shapes: a rectangular table top set on a rounded base, for example, or a massive piece set on slender legs
Shiny, lacquered surfaces
Bright or strongly patterned upholstery
Delicate legs that taper at both the bottom and the top, seeming to flow organically out of the base of the piece
Feet tips contrastingly colored to leg
Favorite woods: macassar ebony, amboyna burl, zebra wood, rosewood, birds-eye maple
Decorative accents: sharkskin, shagreen, horn, ivory, tooled leather, tortoiseshell
Witty decorative touches; trompe l’oeil inlay (as on the inlay that duplicates a piece of fabric in a vanity)
Ruhlmann’s later pieces grew more sturdy and less ornate (similar to the way Rococo styles gave to more restrained Neoclassical as the 18th century progressed). He also began working more in metals and industrial materials. His company ceased operation upon his death in 1933.

Money Matters
Even in his own day, Ruhlmann’s pieces were extremely expensive, commissioned by wealthy families such as the Renaults, the Rodiers, and the Rothschilds. The posthumous closure of his workshops only added to the value of his furniture. Contemporary collectors have included the late Yves Saint Laurent, Andy Warhol, and Karl Lagerfeld, often purchased through high-end auction houses, and many museums display examples of his work.

Authentic items, whose undersides are stamped or branded “Ruhlmann” and sometimes “Atelier A” or “Atelier B” (indicating which workshop made them) can fetch hundreds of thousands at auction. A Ruhlmann armchair from Saint Laurent’s collection went for more than $233,000 at a Christie’s Paris auction in February 2009; a 1932 black lacquer desk fetched nearly $362,000 at another Christie’s Paris auction in November of that year. More recently, a dining-room sideboard was auctioned for over $1.5 million on Dec. 16, 2010, at Sotheby’s in New York. However, smaller pieces and decorative objects may be available for five figures through antique dealers.

Although he designed for the elite – “The lower classes never set fashion,” he was once quoted as saying in the magazine Art et Décoration – Emile-Jacques Ruhlmann helped introduce Art Deco to the world.